As autonomous vehicles get closer to a market reality, the patent engines will be firing up. What type of patenting activity can we see so far?

Searching the USPTO abstracts for combinations of “autonomous”, “self- driving”, “car”, and “vehicle” I found a total of 271 patents.
After organizing these patents into groups of their IPC class, I investigated each IPC class to determine if it is emerging or declining technology. Since vehicles such as submarines and airplanes have had autopilot functions since the 80’s there are some IPC classes such as “2D position controls” and “Steering Controls” that are already in decline. In order to find which IPC’s are emerging and which ones are in decline, I charted their growth of each IPC against it’s average over the 34 year period from 1976-2010. This is just a sample of the IPCs that I have investigated, however, it shows that some technologies related to autonomous vehicles are starting to receive increasing potential. Of course this means opportunity for firms with the capabilities in these IPC’s. Firms with competencies in these emerging IPC’s need to recognize their positions represent potential value and consider investing in some R&D projects that can produce patentable products related to the emergence of autonomous vehicles. Some possible patenting deployment strategies such as Isocost curves, pooling, complimentary pooling, patent family formation, or patent blocking are worth checking out, especially if a firm has experience in strategic portfolio management .

The following chart shows the patenting activity for the selected group of IPCs related to autonomous vehicles. This group of IPCs is not exhaustive. Values above zero represent above average patenting in that IPC (the average is calculated by adding all the patents for an individual IPC from 1976-2010 and then dividing by 34). Therefore, when the line is above zero the IPC is in a growth phase, when it’s below zero, its in a decline phase. The chart indicates that classes for “Navigation & Motion Detection”, “Computer Reading and Symbol Recognition”, “Anti-Collision Systems”, and “Automatic Pilot” are all seeing increasing patenting activity.

If you have any questions please contact me: joseph.lee.esl@gmail.com 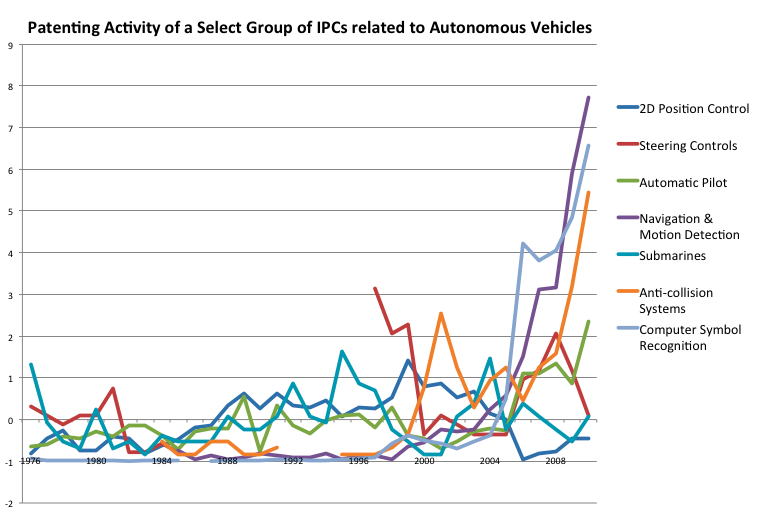