In order to ‘catch the wave’ of CNT technology, firms in the semiconductor industry will need to morph their business model to accommodate competition and new opportunities. The reason that I say “morph” the business model, instead of radically change it, is because the shift to CNT from silicon is not here yet, it is a long process forthcoming, and the shift will entail many years of extensive forecasting and planning. The stakes are high for semiconductor developers and manufacturers, so a careful balance between maintaining strong revenue streams, and investing it into R&D is more realistic strategy than a ‘flip the switch’ type of strategy. Although it is less likely that a new player will suddenly emerge onto the field and eat lunches (like Netflix is doing in online media) because of the high barrier to entry, patent activity should be carefully monitored and assessed to judge the relative positions of chip-makers as the switch to CNT approaches.

First mover’s dilemma plays a critical role in how firms road-map their entry, and position in to the CNT technology paradigm. First mover’s dilemma implies that firms need to spend more capital to be the leader, and firms that follow will inherently need to spend less capital to catch-up. When planning R&D activities, firms must choose whether to try and be the ‘first mover’ or how closely to try and follow the first mover’ into the market. Decisions in position planning need to be followed up with calculated setting and actualization of R&D goals, as well as related IP accumulation. If these plans are not set appropriately, or actualized according to the set time and budget constrains positions can be lost.

When developing hi-tech, patenting plays an important role to secure future economic rights to various components of the technology in question. Highly complex semiconductor technology requires many patents – referred to as a ‘patent thicket’. Firms need to carefully choose the areas where they are confident to achieve efficient R&D, develop essential core competencies, and secure key patents in order to have ‘cards to play’ in the ensuing cross licensing thicket that will define industry market positions once the technology is matured.

The diagrams below show the relative positions of nations and firms in the semiconductor industry. One set of charts for both national and firm positions show silicon-based patent totals, while the other shows CNT-based patent totals. These charts were calculated by myself from access to USPTO patent database used for research.

The results of the charts indicate shifting positions within the industry. The changing positions on a national and firm level constitute the impact. Although America’s position remains dominant, Japan has failed accumulate a large share of CNT-based patents yet. China has significantly grown their share of CNT-based patents relative to their share of silicon-based patents. Other shifts in dominant players mostly affect the positions of predominantly south East Asian nations. Taiwan is increasing its push towards CNT technology while Korea has held back so far.

An equal amount of position disruption can be seen in the firm assessment, if not more. Most of the top firms have been displaced and Asian firms have come to dominate the top spots. Hon-Hai Precision Industries, Tsinghua Unviersity have replaced Micron and IBM as leaders.

The limitations of this preliminary study are: (1) The patent totals have not been weighed according to value indicators. Therefore, although they do accurately show changes in patenting activity, they are not a reliable measure of technological value. Its true that a small number of patents constitute almost all the economic value, and so mere patent grant totals cannot indicate value creation alone (Harhoff, 2000). More depth into patent value indicators can provide more information as to the relative positions. However, since the technology has not reached market yet, those ex post indicators are slim. 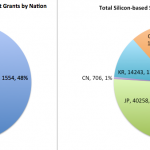 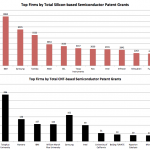