As the Center for Strategic and International Studies notes, innovation in an important factor in a nation maintaining global power. Patents secure the rights for companies and national economies to generate GDP by producing products that other countries will buy and import. So, patents are critical to securing income from innovation. However, patenting strategy, whether on the national or corporate level is also critical to directing resources efficiently and effectively. You can’t have a patenting strategy if you don’t analyze the landscape.

China’s activity in global patenting is booming. Although it does not necessarily represent a drastic increase in novel innovation, it does signal desire to compete. Some have been very critical of the value of China’s Patenting…

An analysis of China as both a patenting entity and as a nation that administers its own patenting office is very interesting. China has exploded onto the global patenting scene and have taken the lead in both international patent applications filed [2][3][4] filing 58,990 international applications last year, beating out the United States which filed 57,840, and in domestic filings by the Chinese National Intellectual Property Administration (CNIPA) issuing the most patents from their domestic patent office.

What benefits does China gain by having a flood of patents that are not necessarily very innovative. For one it gets Chinese businesses into the mindset of developing a patenting strategy for both domestic filings and international filings. In other words, Chinese companies will be developing patenting competency. Also, the CNIPA will be efficient at operating at scale.

PCT Applications by country in 2019.

Number of Documents in Each National Patent Office 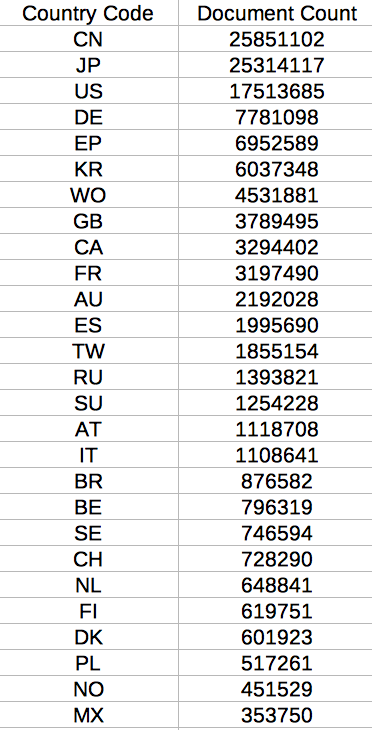