The first chart below shows the probability that a patent will become litigated for the whole USPTO (blue), commercial and business software IPC G06Q (red), and the total G06Q patent issued per year from 1990-2011. The chart tells the story pretty clearly. That is, software patents have a much higher possibility of litigation than average for the whole USPTO. Also, commercial software patenting is increasing significantly to over 3000 patents per year. In this data model probability is calculated by the number of litigated patents each year divided by a cumulative total of issued patents in each category starting in 1976. While patenting is increasing, litigation is increasing faster. The actual probabilities may be slightly higher than shown here considering that the cumulative totals are run from 1976 until the calculated year. The second chart showing the average age of litigated patents for the entire USPTO and G06Q show that likeliness of 1976 patents being litigated in 2011 for example is quite low. This could be taken into consideration when calculating cumulative totals in a more complex model. However the average age of litigated patents does indicated that older patents are being litigated more often now then before. Perhaps a period of technologically significant development (2000-2002) produced patents that are still significant today. The main question that arrises in my mind when looking at how the average age of litigated patents is increasing is: Should software (or all) patents have a shorter period of validity? Does an increased pace of technological development warrant reducing the shelf-life of patents? Is the current period of technological slowdown partly due to patent validity periods that are too long? I believe that this is partly the case for some industries such as software that are fast moving and have low barrier to entry. Pharmaceuticals on the other hand has extensive trial periods and perhaps the validity period could be extended to reflect this. Regardless, a major consideration of patent reform should be the duration of validity. It seems like archaic policy that ALL PATENTS should be 20 years. 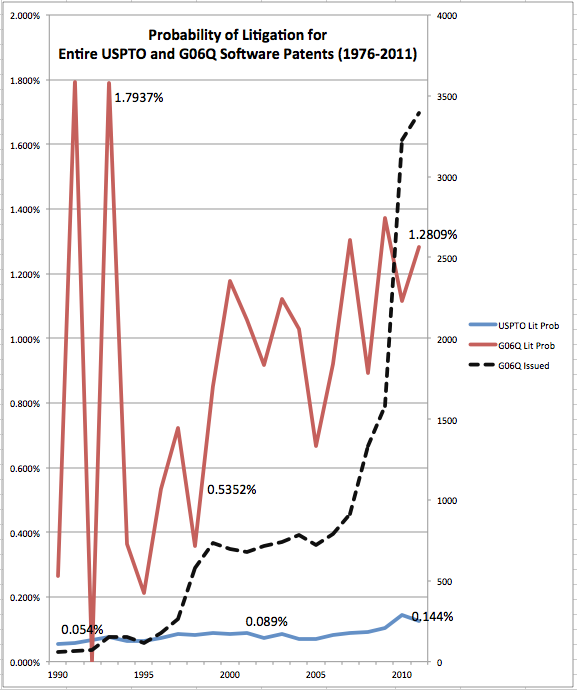 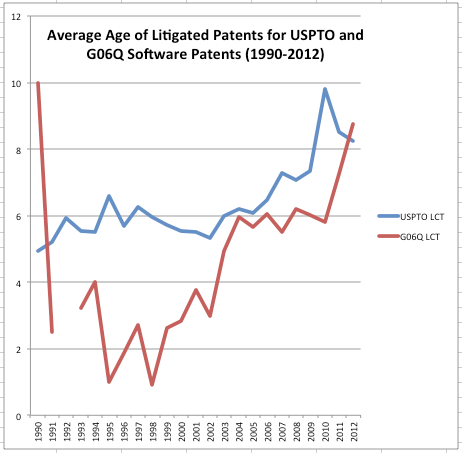