Software patent policy keeps getting press for the amount of litigation rife. Many question whether the excessive litigation of software companies is hurting innovation and there are many sides to this story. Most agree the system is broken, but consensus lacks in how exactly to fix it. One example of how the system is broken involves Ceats Inc. They amassed many software patents regarding ticket selling software. However, last year a jury rejected the validity of their patents. The jury argued that prior art had already existed. Therefore there is a two-fold problem of A) The patent office ability to search for prior art or judge non-obviousness seems to be inadequate. B) If companies cannot rely on the validity of patents that have been issued, then ROE uncertainty is high and the possibility of getting sued by a patent troll would certainly deter large companies from entering into questionable markets. This holds up the release of consumer products and has a cooling effect on software application innovation.
http://www.dallasnews.com/business/headlines/20120322-texas-jury-rejects-85-million-suit-over-online-ticketing-patent.ece

Here is some evidence that innovation is being stifled by the excessive litigation:

Firstly, the following table shows the how the litigation of one particular classification of patents (IPC), specifically G/06/Q which is basically business software patents.
The green line shows G/06/Q patents role in the whole USPTO litigation instances. They have grown to represent almost 7.5% of the total litigation instances. Very disproportionate considering that they are a very small part of the total UPSTO grants at about 1.5% (second table below). The telling tale is here though: G/06/Q patents have seen a greatly disproportionate slow down in technological pace. (third table below). The technology cycle time (TCT) measure for G/06/Q patents (green line) has gone up from being almost equal to other G/06 patents (which has been lower than the USPTO average) to being not only above the other G/06 patents but also higher than the USPTO average. The technology cycle time can be described as the speed at which technology replaces itself as measured by the average age of citations on a patent grant.

The increasing TCT for G/06/Q patents could be due to less patenting than should be warranted for a potentially explosive industry. If companies feel that the area is a risky one due to patent policy inadequacies creating uncertainty, they may avoid R&D in that area. Also, since the barrier to entry is very low for software development, the innovation may be largely taking place by individuals and small companies. This means that the patent litigation is an even larger barrier due to the cost of litigation for small companies. Even if companies do survive the litigation, they are certainly worse for the wear in terms of cash flow and energy wasted fighting the infringement suits.
(My TCT blog article: http://josephlee.wordpress.com/2012/12/05/pace-of-technological-innovation-using-tct-evidence-in-uspto/)

This also shows another problem with the system: G class patents are supposed to be physics. I’m not sure that is a valid class for software. If anything, B class “PERFORMING OPERATIONS” seems that it would be a better class for software since the role of software is to perform operations on data. 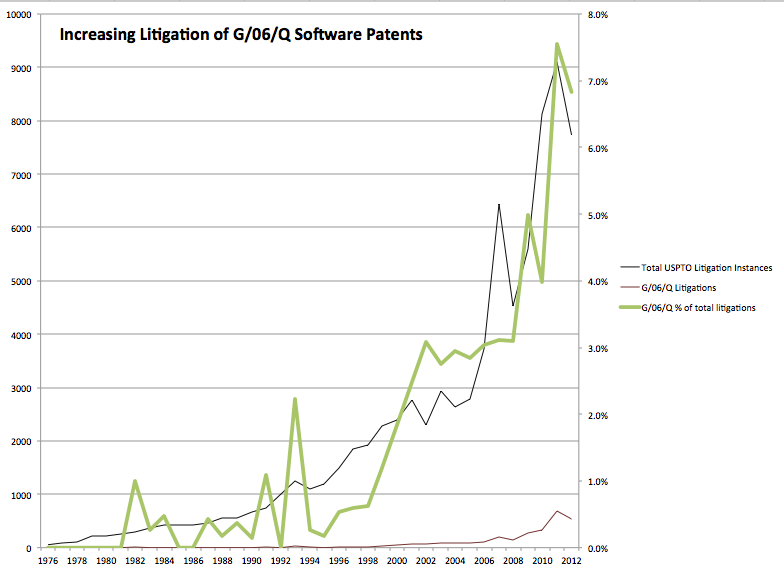 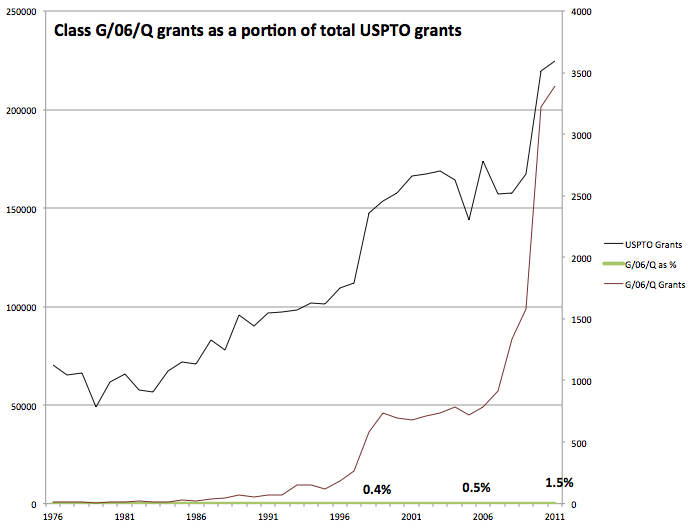 Above: G/06/Q patents make up a small portion of total USPTO grants 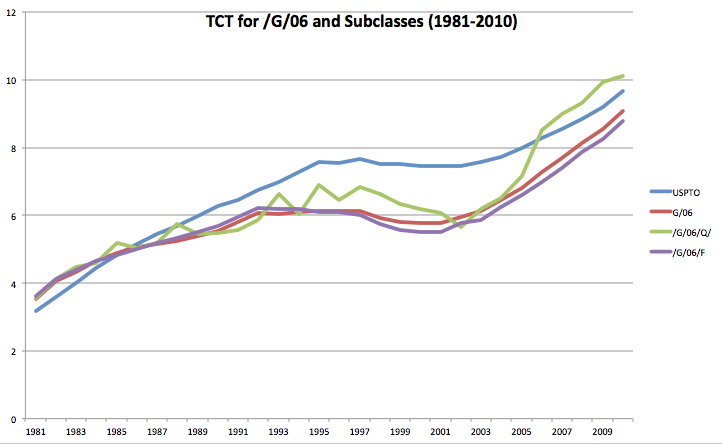 Above: G/06/Q patents show a much slower “pace of technological change” than other G/06 patents