Major TV networks in several cases have been acquired by or merged with cable providers. Their business model is heavily integrated with cable and internet service. With respect to internet technology, their biggest fear may be the realization of a technology race coined “The Last Mile” (Cordeiro, 2003). The goal of ‘the last mile’ is for telecoms to deliver broadband wireless internet to homes. Intel had plans to help make that happen with WiMax but luckily for ISP’s have come up short so far. If telecoms were to successfully develop a superior last mile solution, consumers may switch from Comcast or AOL cable internet to Verizon or AT&T. So, wireless broadband is a potentially disruptive technology for cable service providers (Goodwins, 2005; The Economist 2002).

With respect to online video content being a disruptive technology, TV networks biggest fear may that global broadband penetration, significant improvements in broadband speeds and camera technologies have allowed anyone to become a content producer in their own home (Foster, 2009). For years now, many consumers have flocked to sites like Youtube and Vimeo to share their self-produced content, and social networks have been emerging where people subscribe to amateur video content that interests them. Naturally if the trend of interest in user-generated content continues, less eyeballs will tune into American Idol, or whatever else mainstream TV networks are offering.

Also, If the big sports leagues (NBA, NFL, MLB, NHL, NASCAR) were to sign contracts with other content producing companies, TV networks would lose billions in annual revenue (Auletta, 2013). The sports leagues have continued to sign massive deals with major networks (Hughes, 2012). In their favour, the big networks have the tacit knowledge, infrastructure, relationships, and experience to produce the best product when it comes to live sports. 3D video technologies will ensure that big networks have something new and attractive to hold interest high.

Actually, my opinion is that TV networks are not generally in a state of fear with their current market position. Stock prices don’t reflect any reason to worry (figure 1). For comparison, Kodak stock price had gradually dropped since about 2000 before bankruptcy and now rests at three cents (figure 2). What do investors know about TV networks? How could their stock be so valued if they were in serious trouble? It’s hard to fool Wall Street.

Potentially disruptive technologies have caused havoc in the camera and print media industries, but people still watch cable TV en masse. Ratings are down, but TV networks have invested, and have a huge share of the internet -the proposed technological disruption in question. Comcast acquired NBC and Universal Pictures/Time-Warner/AOL is also a hybrid TV network/cable provider. Fox owns Hulu and has seen some serious investment coming in there from Disney and now recently from NBC Universal. The big networks – ABC, Fox, NBS, CBS; their content is all available online. This gives the networks a strong position in the internet. They are not missing anything there.

The TV networks’/cable provider’s capital wealth is excessive and they have time to wait it out. Unlike Netflix, they are huge companies with and are therefore slow moving by nature (Chen, 1995). Any proposed scenario where major TV networks fail to generate revenue seem unlikely. The internet? They own it. Content? It’s their core competency. Americans stop eating mainstream culture? No way! Nothing will scare big TV networks for the next decade, they are well positioned. 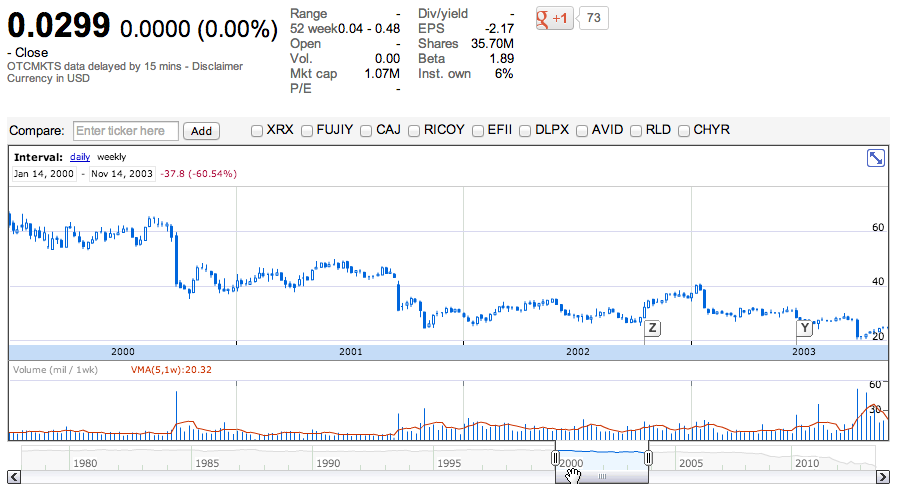 Figure 2: Declining stock of Kodak since 2000 (Note: the stock price continued to drop constantly until present time, but the whole chart would not fit into the window.

Crawford, Susan (2013), Big Cable’s Sauron-Like Plan for One Infrastructure to Rule Us All.http://www.wired.com/opinion/2013/07/big-cables-plan-for-one-infrastructure-to-rule-us-all/

Foster, Justin. (2009). A New Paradigm for Marketing, Selling, and Servicing Commercial Products and Services on the Internet. http://video-commerce.org/Video_Commerce_and_ECommerce_Video_Disruptive_Innovations_in_E-Commerce.pd…